Met up with the ex-hall neighbours for brunch on Deepavali, decided to try out this newly opened pancake place at Prinsep Street. As you can tell from the name, this place sells strictly pancakes. And drinks as well. And sandwiches and some finger food. I came to know of its existence through Yogi Bear, whose BF's friend is the owner, who is also coincidentally Pineapple's friend's sister's friend. I think. Singapore is so small that everyone is a friend of your friend.
Anyway, I love trying out new places! So we met at Dhoby Ghaut at around 11+am, early because I heard it gets full house easily! 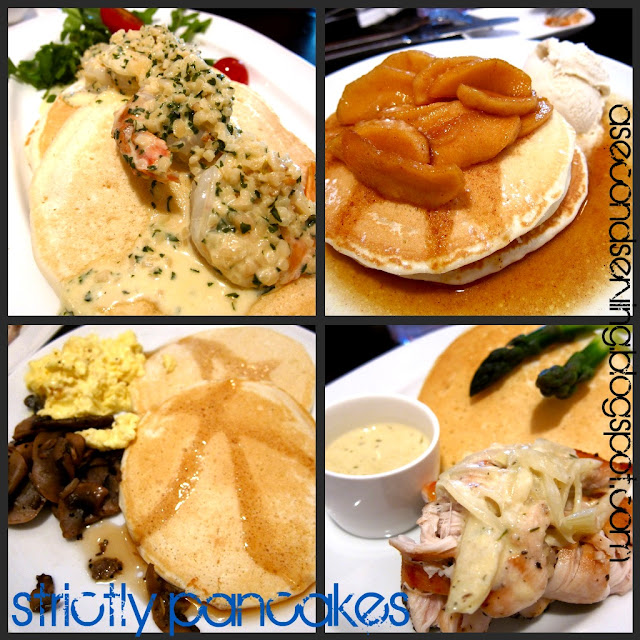 Looks yummy doesn't it! Read on! 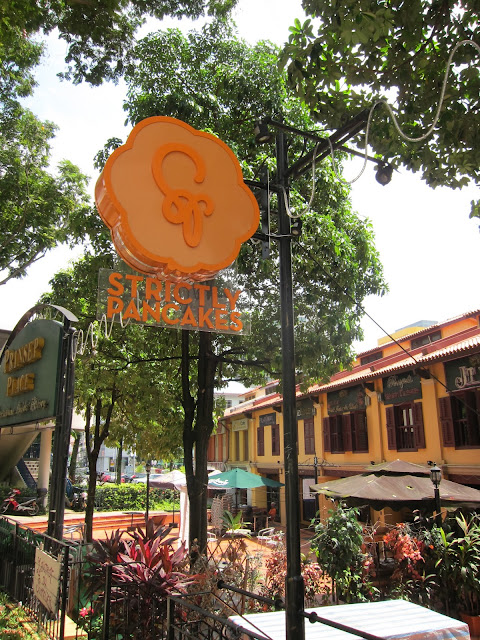 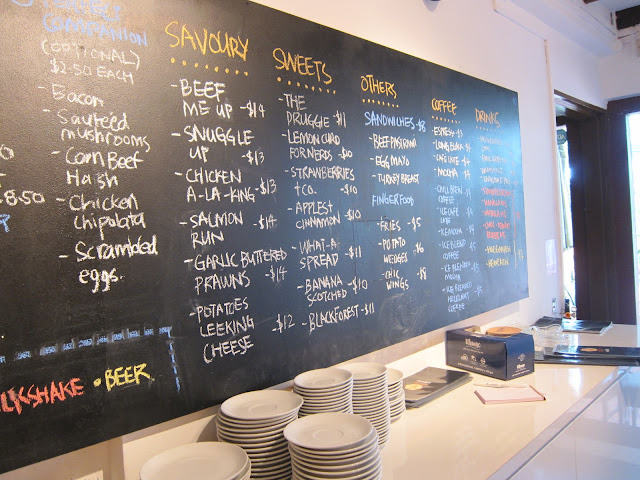 A very cozy little cafe. We wanted to sit upstairs because I heard there were couches there which sounded more comfy, but they told us it was full there already, so we sat on the first storey instead. Though during our meal, we saw new customers kept entering and walking up the stairs...


I didn't know maple had so much goodness! It's probably still too sweet to be taken on a regular basis though. 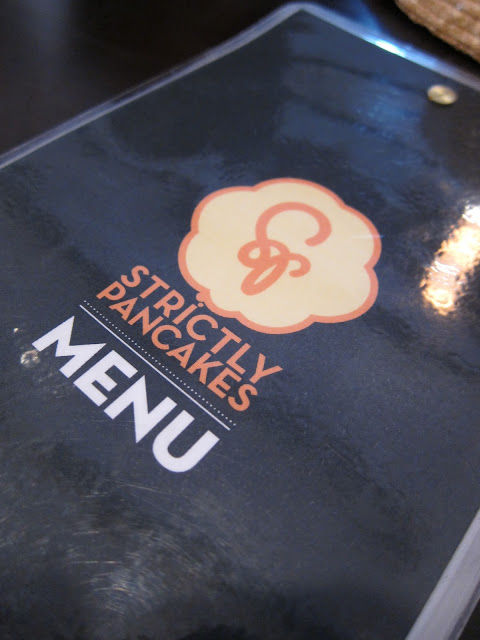 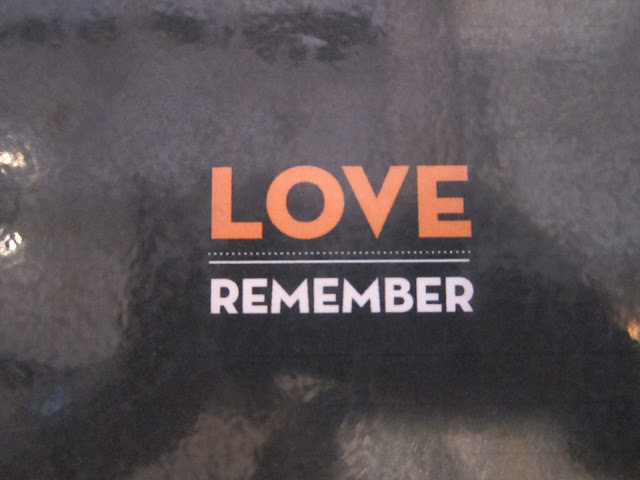 Nutella shake - $5. I liked it, 'cos it wasn't too sweet and too "gelad", though there wasn't really any hint of nutella haha! 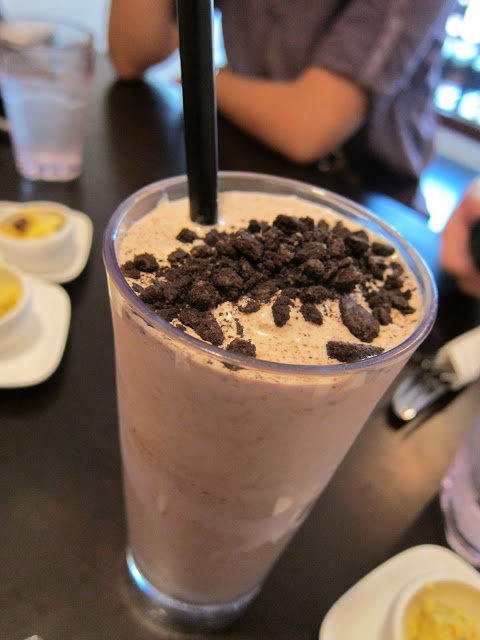 For the butter, you can have a choice of salted/unsalted butter, garlic and herbs, or rum and raisin. The maple syrup comes in a strange tilted glass. 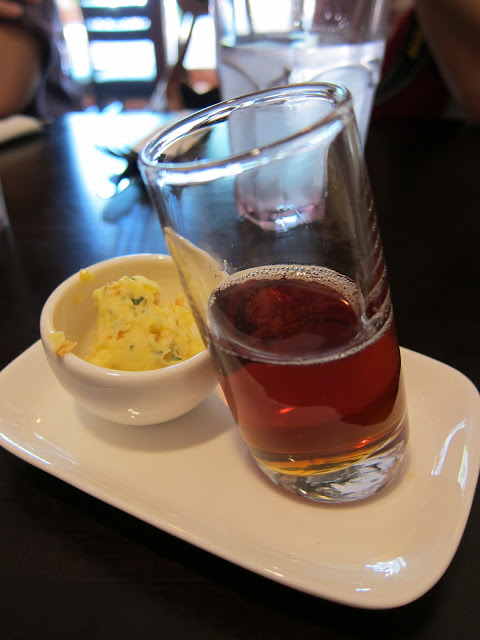 I heard that the Garlic Butter Prawns ($14) pancake was really good, so we ordered this. Can't say no to prawns in garlic and butter sauce! And you probably can't go wrong with them either! Came with 3 pancakes and 5 prawns. The prawns were really crunchy and the sauce was yummy too! 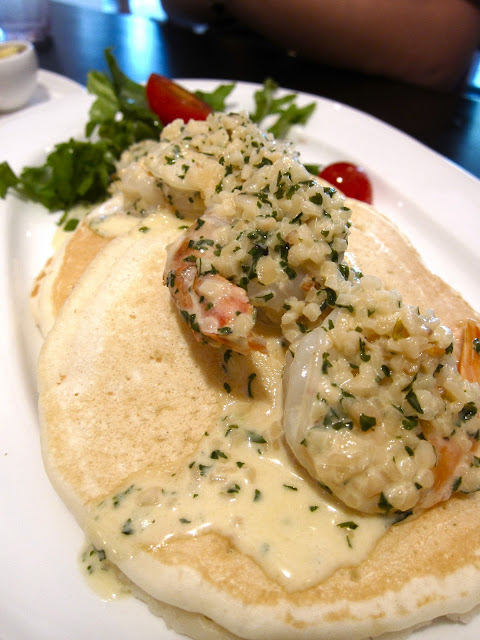 Chicken A La King ($13) - It comes with some cream sauce that went well with the chicken. The chicken was tender in that it was chewy but then again, it was tough 'cos after chewing it it takes a long time to be chewed into smaller pieces! 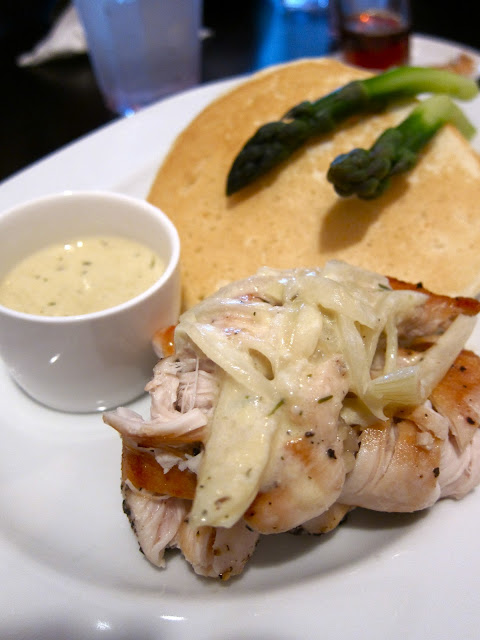 Our interest got piqued by the mushrooms and scrambled eggs which are almost always the perfect brunch selection. So we ordered the short stack (2 pancakes) with these two toppings. ($10.50) This one was really worth the money. Not that it wasn't good, but just that it could easily be done. 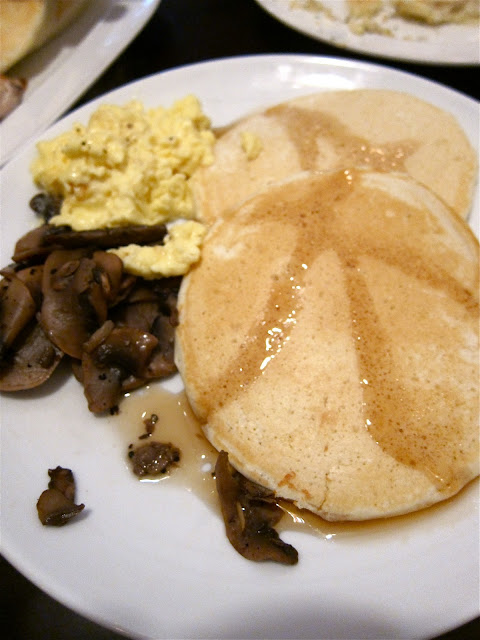 For our dessert, we chose the apple and cinnamon pancakes ($10). Caramelized apples in cinnamon sauce and vanilla ice cream. By this time we were already so full by the 8 pancakes we had earlier! Our appetites had clearly shrunk. Somehow the vanilla ice cream was a bit "sticky" but nevertheless good. Tasted a bit different from the usual vanilla ice cream that I eat. This was good. Other choices include really sinful ones like chocolate pancakes with chocolate sauce and peanut butter and whatnot. Would love to try that someday (though not anytime soon haha!) along with the salmon pancake. 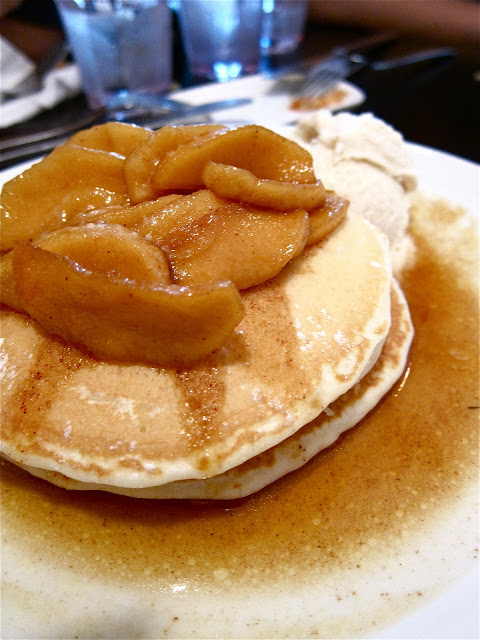 5 of us girls shared 3 mains and 1 dessert and we were super full from them. I think it's quite a cool concept. Business seems to be booming during these first few months of opening. It's worth a try, I feel :)

Powered by a love for food, eating and writing.

Serenely full, the epicure would say,
"Fate cannot harm me, I have dined to-day."
- Sydney Smith